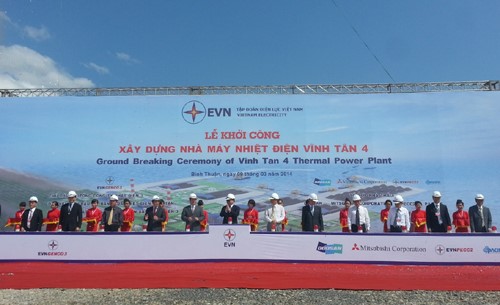 Due to the slow implementation progress of many power plant projects, especially the projects in Southern region, that may lead to electricity shortage for this region in 2017-2019, the Prime Minister has issued the Decision on amending the schedule for some of power plant and transmission grid projects in 2014-2020 period. The Decision also stipulaies some of special mechanisms and policies for implementing urgent power projects in order to meet power demand in 2014-2020 and after 2020 periods. Regarding Vinh Tan 4 project, it is necessary to speed up the implementation progress so that the first unit could be put into operation by 2017 and all the project fulfiled by the beginning of 2018.

Vinh Tan 4 thermal power plant (TPP) is government key project, invested by EVN, the one of four projects the Vinh Tan power Center with total capacity of 5600MW. The project is characterested by following features i) the TPP is coal fired with two super critical steam parameter boilers, installed capacity of 1200MW (2x600MW), total generation 7.2Twh per year and total invesment cost of over VND 36,000 billion, ii) the domestic resource proportion for project is very high (nearly 26%), iii) this is the first large TPP designed by domestic consultant company, and iv) the new model of investment arrangement is applied for project implementation.

The preparation works for Vinh Tan 4 TPP imprementation may be summarised as follow:

The land site preparation works have been executed by Vinacoalmin in collaboration with project Investors in Vinh Tan thermal power center and all levels of government in Binh Thuan province. The project site release has been completed basically, that satisfied handing over schedule of the project site and created comfortable conditions for organization of the beginning ceremony today.

For steering and managing the project implementation, EVN has commited EVNGenco 3 as the Project Investor, and who, by his turn, has established the Project Management Board.

December 23, 2013, EVNGenco 3 and the Consortium of Contractors including Heavy Industry Group Doosan (Korea), Mitsubishi (Japan), Join-Stock Company of Pacific Group and Power Engineering Consulting Join-Stock Company 2 (PECC 2) sign an EPC Contract of US$1.36 billion, among that 85% is privilege export credit, buyer trade fund from Korea Export-Import Bank Consortium (KEXIM), Korea Insurance Trade Company (KSURE), Japan Bank of International Cooporation (JIBC) and Nippon Export and Investment Insurance Company (NEXI, Japan), and 15% is Investor’ responsive fund borrowed from Domestic Banks, the Terminal of which is the Bank of Investment and Development of Vietnam (BIDV). This is the very special mechanism Prime Minister permits to invest urgent power projects in 2013-2020 according to Decision No 2414/QĐ-TTg dated by 11/12/2013

Vinh Tan 4 TPP project EPC General Contractor is the Consortium of DOOSAN - MITSUBISHI –PECC 2-PACIFIC. The Power Engineering Consulting JS Company (PECC 2) in collaboration with foreign auxiliary consulting companies will be the Consultant for the Investor on supevising construction of the project. This is the first EPC contract of TPP project that a domestic consultant company (PECC 2) participates in as a member of the Consortium of Contrators

Regarding coal supply for Vinh Tan 4 TPP, particularly, Vinh Tan TPP Center and the other TPP Centers in Southen region in future generally, Mr. Hoang Trung Hai required Ministry of Transport, concerning ministries and sectors to preparete best the specified Ship Teams and Coal Ports in order to meet the need of a huge coal demand.